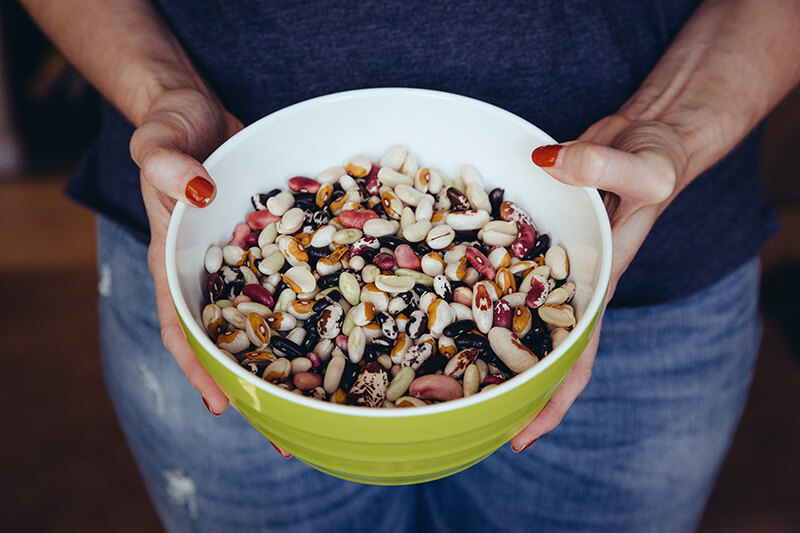 According to Instagram, Twitter, and hundreds of blog posts around the world, heirloom beans are possibly the biggest thing in the healthy eating world. You may have seen them and thought they look like any other bean you’ve ever seen, but they’re different: they’re heirloom. You’ve heard of the word. Maybe you have one or two, possibly your grandma’s diamond ring or your great uncle’s, cufflinks. Now get ready for a new meaning of the word heirloom. The latest trend is heirloom beans. What in the world do beans have to do with Grandma Mabel’s ring?? Well, similar to that piece of jewelry, the word heirloom refers to the history behind the object.

What does Heirloom actually mean?

The term heirloom is composed of three factors: age, pollination, and quality:

Heirloom produce is usually grown and cultivated from seeds that have been passed on from generations possibly 50 or more years ago.

Regarding pollination, heirloom crops are open pollinated…in other words it happens NATURALLY, not coerced by outside assistance. Birds. Bees. Wind. The whole shabang.

That leads us to the final factor: quality. What really gets people is the flavor, the taste and quality of commercially grown produce doesn’t hold a torch to that of heirloom foods. Once you try heirloom, you’ll never go back.

What makes Heirloom Beans different than other beans?

We’ve already learned, the way the beans are grown and composed is different. They’re cultivated and pollinated naturally to preserve the quality and taste. In addition, the rarity of the beans is part of the appeal. The fact that they are not mass produced and sold everywhere, is alluring. The farmers of these beans have explained that sometimes,  “ — an entire row of plants may only yield a few pods —” so if it’s a bad year, they are less available to the public. What’s more exciting than being one of the only people to find and eat rare and elusive heirloom beans?

Next is the taste. When you think of how beans taste, not much comes to mind. Mild? Bland? Maybe no flavor but definitely mushy. Not the most pleasant terms to portray your food…However get ready for the new flavors experienced through heirloom beans! Rich, Hearty, Fulfilling, Meaty, Savory. If you didn’t know what we were talking about, you may even mistake this as a description for bacon. Furthermore, even the texture is different: firmer and more substantial.

Not necessarily, however, colorful beans do show higher nutritional values than monochromatic, dull-colored beans. The nutritional value of these beans is incredible. Kantha Shelke, a food scientist at Corvus Blue LLC and spokesperson for the Institute of Food Technologists (IFT),  states that “The growing awareness that two servings of beans per day can help one get rid of their belly fat and reduce overall body fat has increased consumer demand for products made with heirloom beans and beans in general.” They are a huge staple in gluten-free and vegan diets due to their high amounts of protein and fiber. They are often used to substitute animal proteins, as a low fat, healthy alternative, ideal for low-calorie diets. Hundreds of recipes are churned out each day turning these magic beans into meals fit for a king.  As a side note, SunRidge Farms’ Heirloom Beans are organic which sets them apart from conventionally grown beans.

In conclusion, not only do they taste, look and cook better, but all the varieties have exceptionally cool names like: “The Scarlet Runner”, or the “Black Valentine”. I mean, come ON. Who could resist a bean that sounds like it’s going to be the next Oscar award-winning movie?